The Michael Green Acquisition and the Future of Tall Wood Buildings

"Building a skyscraper? Forget about steel and concrete, says architect Michael Green, and build it out of ... wood. As he details in this intriguing talk, it's not only possible to build safe wooden structures up to 30 stories tall (and, he hopes, higher), it's necessary." 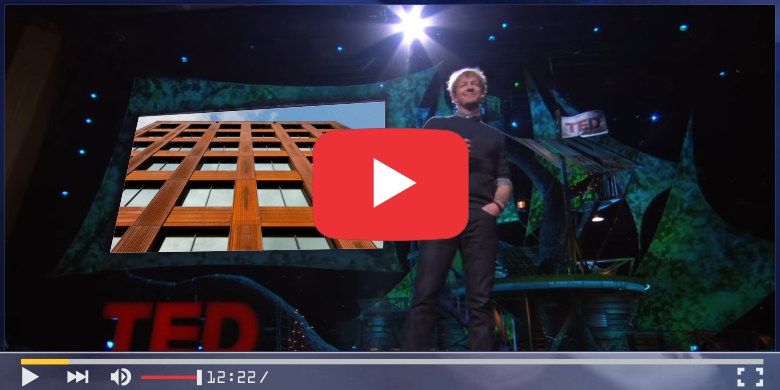 Timber is trending. Earlier this year, Azure wrote about the proliferation of plyscrapers around the world: thanks to the possibilities of cross-laminated timber, which is fire-resistant and as strong as concrete, wood construction is being considered for 70-storey buildings in Japan, 80-storey residential projects in London and mid-rise college campuses in Toronto. And one of the most prominent champions of timber construction is Vancouver-based Michael Green, whose firm has been pushing wood buildings – and indeed wood cities – since 2012.

Green, who authored The Case for Tall Wood Buildings and won a 2017 AZ Award for Environmental Leadership for his T3 Minneapolis office building, promotes timber as an environmentally friendly alternative to concrete. Earlier this week, Michael Green Architecture (MGA) was acquired by Katerra, a Silicon Valley construction startup that received $865 million from Japanese venture capital giant Softbank Vision Fund. Reportedy valued at over $3 billion, Katerra is run by former Tesla interim CEO Michael Marks; it lists itself as a tech company, though it aims to disrupt the construction industry.

Green says that, after the acquisition, he will remain the president and CEO of his firm – it will be called Michael Green Architecture, a Katerra company. In an email, Green says that its parent company will help “advance our agenda on design, quality, sustainability and affordability.” MGA and its two dozen employees will remain in Vancouver.

Katerra, Architectural Record notes, wants to vertically integrate all aspects of construction, from design to subcontracting. Founded three years ago, it, like Green, focuses on affordability through efficiency: Katerra has created market-rate multi-family housing and student and senior housing, with projects focused on mass-timber construction. The acquisition of MGA, it seems, is a step towards making its architecture division more environmentally friendly – and could provide Green with wider resources, both human and financial, to achieve his wood-built ambitions.

The terms of MGA’s acquisition by Katerra were not disclosed.

Green said the acquisition allows him to make a bigger impact on the North American market – though his reach already extends beyond his Gastown office. MGA’s recent projects include the OSU College of Forestry building at Oregon State University, a proposal for the world’s tallest timber tower in Paris, and Riverfront Square, a 2,000-unit residential project in New Jersey.

Though the acquisition is a victory for Green, it’s also a promising step for the future of timber construction. Silicon Valley’s embrace – and investment – in architecture, green design and wood construction could have a lasting impact on the built environment. For a glimpse of what the future may have in store, watch Green’s influential TEDxTalk above.