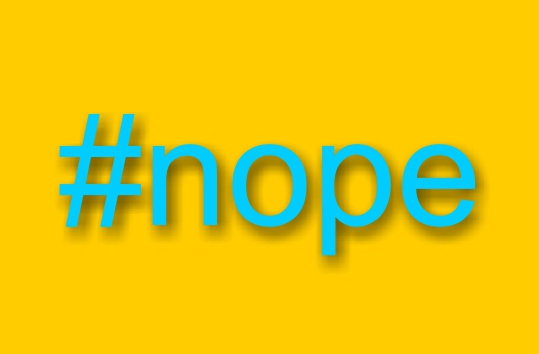 When it comes to business, we talk too much about social media and expect too little. It’s like the old joke about sales people: one person says, “I made some valuable contacts today,” and the other responds, “I didn’t get any orders, either.” Companies measure the market results of their sales investments. But few have measures or even have accountable managers in place for their social media investments, and only 7% say their organizations “understand the exact value at stake from digital.” Meanwhile, according to a Gallup survey, 62% of U.S. adults who use social media say these sites have no influence on their purchasing decisions and only 5% say they have a great deal of influence.

When banner ads first appeared their CTR was 10%, but that soon fell due to heavy usage by firms, and clutter. Research has long demonstrated that ad elasticities are generally very low, that firms often persist with ineffective ad media (because they have the wrong measures or no measures), and that companies routinely over-spend on ads (due to ad agency incentives, the fact that ad expenses are tax-deductible, and companies’ use-it-or-lose-it budgeting processes). Other research indicates that traditional offline consumer opinion surveys (when they use representative samples) are better at predicting sales than clicks, number of website visits or page views, positive or negative social media conversations, and search (although online behavior is good at tracking the reasons behind week-to-week changes in sales.)

With new media, therefore, great expectations are common and missing the goal is understandable: it takes practice and learning. But changing or dismantling the goal posts is a different story.

It’s now common to say that social media is “really” about awareness, not sales. Companies that “get” social media should be “relentless givers [who] connect instead of promote.” In fact, forget “traditional” ROI (that lovely qualifier), focus on consumer use of social media and, instead of calculating the returns in terms of customer response, measure the number of visits with that social media application. How convenient: to be evaluated with a metric without tangible marketplace outcomes. But it’s wrong, a circular argument, and smart companies should not follow this flawed business logic.

The value of any advertising, online or offline, depends on what effects it has on purchases. As Bill Bernbach, David Ogilvy, and other ad execs have emphasized, “our job is to sell our clients’ merchandise, not ourselves.” Those effects are difficult to measure, because consumers buy (or not) for many different reasons and even good ads in the right media have both carryover and wear-out effects that vary over the product life cycle and an ad campaign. But to justify an investment by activity and not outcomes is a tautology — we advertise because we advertise — not a meaningful business argument.

Even an activity measure, moreover, assumes the consumer can see the ad. Did you know that a display ad is deemed “viewable” if at least half of each ad is visible on your computer or smart phone for a minimum of one second? Data released in 2014 by comScore indicated that more than half of online display ads appear on parts of a web page that are not viewable. In response, the Interactive Advertising Bureau noted that for various reasons 100% viewability is “not yet possible,” but the industry should aim for 70%. In other words, hope that “only” 30% of your intended ads are not seen by anyone for at least a second!

Further, what we now know about shopping and social media activity says that online and offline behavior interact. They’re complements, not substitutes, and you ignore these interactions at your peril. The vast majority of communications on social media sites are between friends who are within 10 miles of each other. The same is true about the available data on buying behavior. As Wharton professor David Bell documents, the way people use the internet is largely shaped by where they live, the presence of stores nearby, their neighbors, and local sales taxes.

For years now, we have heard big talk about the big data behind big investments in social media. Let’s see who is behind the curtain. It’s time to expect more from social media and prove it. The Association of Advertising Agencies has refused to endorse the 70% goal and wants 100% viewability, which means if an advertiser buys 1 million impressions from a site, that site must display that ad as many times as it takes to ensure a million viewable impressions. In 2014, The Economist guaranteed those who buy space on its apps and website that readers will spend a certain amount of time there. For instance, it will guarantee that a site containing an ad appearing for three weeks will receive X hours of readers’ attention — documenting, not assuming, engagement with the medium.

Other companies try to trace the links (or not) between online platforms and sales outcomes. They buy point-of-sale data from retailers and have systems that purport to match Facebook or Twitter IDs, for example, with a given campaign and subsequent retail sales for a product. The validity of these approaches is still to be determined. And the FTC has raised concerns about privacy issues and disclosure practices, and has urged Congress to pass legislation to give consumers the right to opt out. But shining light on what does and doesn’t happen here will be a good thing.

Business success requires linking customer-acquisition efforts with a coherent strategy. You can’t do that if you are not clear about the differences between hype and reality when it comes to buying and selling. And we should care about this distinction for reasons that go far beyond making even more ads more viewable. Companies’ abilities to make better use of their resources are important for society, not only shareholders. It spurs productivity, and productivity — not just tweets and selfies — is what spurs growth.