15 Common Grammar Mistakes We All Need to Stop Making 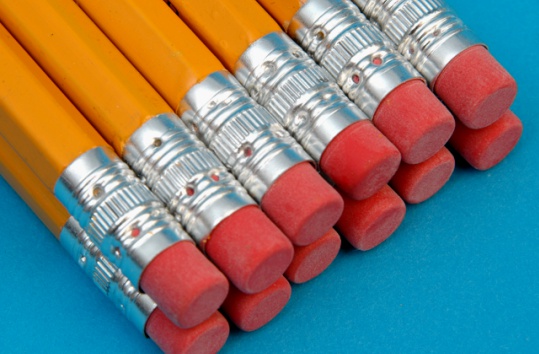 Even after years and years of learning it in school, grammar is just one of the things that many people don't always get right. It's hard. Words and phrases that sound fine in your head or spoken out loud can suddenly look like gibberish when written down -- that is, if you've realized that you made a mistake in the first place.

Realizing that you've made a grammar mistake is half the battle when it comes to defending your content against poor grammar. Lots of times, especially if you're self-editing, it's easy for little grammar mistakes to slip by -- ones that are a letter or two off from the word you need, or just plain usage errors that you're not sure about. These are genuine mistakes -- no one is actually going out and writing these on purpose -- and hopefully your content is largely void of these so it looks polished.

But how do you prevent those grammar mistakes if you're not even aware you're making them? Why, by reading lists posts like this, of course. ;) I'm guilty of these mistakes all the time -- in fact, I pitched this post to my editorial team as "top grammer mistakes" (har har) -- but I've found that reading posts like these helps keep me on my toes when editing my own writing.

So read through the rest of the post and see which mistakes resonate with you the most. Make a mental note to avoid that mistake in the future -- or heck, even bookmark this blog post to remind yourself of them over and over and over again.

One's a contraction for "they are" (they're), one refers to something owned by a group (their), and one refers to a place (there). You know the difference between the three -- just make sure you're triple checking that you're using the right ones at the right places at the right times. I find it's helpful to search through my posts (try control + F, or command + F for Mac users) for those words and check that they're being used in the right context before hitting publish.

Correct Usage: They're going to love going there -- I heard their food is the best!

You made it around the track in under a minute -- you're fast!

How's your fast going? Are you hungry?

See the difference? "Your" is possessive and "you're" is a contraction of "you are." Again, if you're having trouble keeping them straight, try searching for it through your post while editing to double check your usage.

This one tends to confuse even the best of writers. "Its" is possessive and "it's" is a contraction of "it is." Lots of people get tripped up because "it's" has an 's after it -- which normally means something is possessive -- but it's actually a contraction. Do a control + F to find this mistake in your writing. It's really hard to catch on your own, but it's a mistake everyone can make.

This one drives me up a wall when I see it in the wild. Can you see what's wrong with this sentence?

Faster, better, stronger ... than what? What are you comparing your car to? To a horse? A competitor? An older model?

If you have a sentence with an object in it -- basically a noun that receives the action -- passive voice can happen to you. Passive happens when the object of a sentence is put in the beginning of a sentence instead of at the end. With passive voice, your writing is perceived as poor writing to your audience.

Hold up. Read that last paragraph I just wrote -- there's waaaaaay too much passive voice. See how it seems kind of jumbly and not quite punchy? Let's try that again.

Passive voice happens when you have a sentence with an object in it -- basically a noun that receives the action -- and that object appears as the subject of the sentence. Normally, the object of the sentence appears at the end, following a verb. Passive writing isn't as clear as active writing -- your readers will thank you for your attention to detail later.

Make sense? It's kind of a complicated thing to describe, but active voice makes your writing seem more alive and clear. Want to get into the nitty-gritty of passive voice? Check out this tip from Grammar Girl.

I love the name of this grammar mistake -- it makes me think of a life or death situation, hanging precariously off a cliff or something equally as a drastic. (Of course grammar mistakes are never that drastic, but it helps me remember to keep them out of my writing.)

This mistake happens when a descriptive phrase is followed by a noun that shouldn't be described by that phrase. It's easier to see in this example taken from my colleague over on the HubSpot Sales blog:

After declining for months, Jean tried a new tactic to increase ROI.

... What exactly is declining for months? Jean? In reality, the sentence was trying to say that the ROI was declining -- not Jean. To fix this problem, try flipping around the sentence structure (though beware of passive voice)!

Jean tried a new tactic to increase ROI after it had been declining for months.

Most possessive nouns will have an apostrophe -- but where you put that apostrophe is confusing.

If the noun is plural, add the apostrophe after the s. For example: dogs'.

If the noun is singular and ends in s, you should put the apostrophe after the s. For example: dress'.

If the noun is singular and doesn't end in a s, you'll add the apostrophe before the s. For example: lizard's.

If a noun is plural and possessive -- which isn't often -- the rules vary.

Most people understand the difference between the two of these ... until they end up writing a sentence with themselves and another group. Like this sentence, for example:

When you get done with that lab report, can you send it to Bill and I?

When you get done with that lab report, can you send it to Bill and me?

I'm not talking about the do's and don'ts of grammar here -- I'm talking about the actual words: "do's" and "don'ts." They look weird, right? That's because of two things: 1) There's an apostrophe in one to make it plural ... which typically isn't done, and 2) the apostrophes aren't put in the same place in both words. It just looks like a mess.

Unfortunately, it's AP Style ... so we just have to live with it. It's a sexy angle for content formats, so I wouldn't shy away from using it, but just remember that the apostrophes should be in different places -- and that's okay.

Confession: I never remember this rule, so I have to Google it every single time I want to use it in my writing. I'm hoping by writing about it that the trend will stop.

Lots of people use the terms interchangeably when trying to elaborate on a point, but they really mean two different things. "i.e." roughly means "that is" or "in other words" while "e.g." means "example given" or "for example." See the difference? One's used to clarify something you've said, while the other adds color to a story through an example.

You know the difference between the three ... right? This is another that I often see people mess up even if they know what they mean. Peek is taking a quick look at something -- like a sneak peek. Peak is a sharp point -- like the peak of a mountain. And pique means to provoke or instigate -- you know, like your interest. If you're going to use one in your marketing, stop and think for a second -- is that the right "peek" you should be using?

Last but certainly not least is the "into" versus "in to" debate. They're often confused, but "into" indicates movement (Ginny walked into the office) while "in to" is used in lots of situations because the individual words "to" and "in" are frequently used in other parts of a sentence. For example, "to" is often used with infinitive verbs (ex: to drive). Or "in" can be used as part of a verb (ex: call in to a meeting). So if you're trying to decide which to use, ask yourself whether 1) either "in" or "to" fits in with another part of the sentence, or 2) the sentence indicates some sort of movement. If the answers are 1) no, then 2) yes, you should use into.