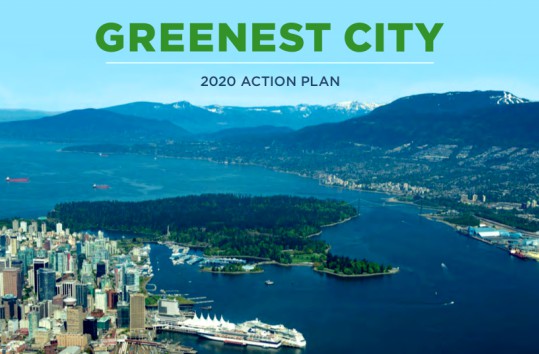 Vancouver City Council received an update today on the Greenest City Action Plan (GCAP), and heard that the City has achieved a four per cent reduction in greenhouse gas emissions since 2007, while Vancouver’s economy and population both grew significantly.

“The 2013 update on the Greenest City Action Plan shows we’re making good progress, but there is much more to do,” said Mayor Gregor Robertson. “The costly impacts of climate change require us to continue working hard and strengthening our partnerships with other levels of government, business and labour communities, and our neighbourhoods and residents.

“Cities around the world are grappling with the effects of climate change, and in Vancouver we’re proving that you can have a strong, healthy economy while reducing carbon pollution. The climate crisis is a daunting global challenge and Vancouver’s leadership shows other cities what can be achieved, so it’s crucial that we keep raising the bar.”

The 2013 GCAP report to Council included an update on the 10 goals outlined in the plan, which collectively strengthen Vancouver’s natural environment, create new economic opportunities, and further establish Vancouver’s reputation as a city that balances economic growth with environmental leadership.

The accomplishments outlined in the report include:

In addition to these accomplishments, Council heard about the significant work ahead that is necessary to achieve the ambitious targets in the Greenest City Action Plan. From local food production and security to green transportation, access to nature and a lighter footprint, the 10 GCAP goals call for local and international leadership. They set out a clear path towards a bright green future for our community and our planet.

To learn more about the plan and read the 2013 GCAP Implementation Update, or to see an interactive map of green projects in Vancouver, please visit Vancouver.ca/greenestcity »